Voice Search Marketing and Your Business

With the saturation of smark speakers, we are focusing on the advancements in Voice Search Marketing. Where do users stand on voice assistants? How widespread is this technology’s use?

How Many People Plan to Buy a Smart Speaker?

We asked 831 people across the U.S., UK, and Canada: Do you plan to buy a smart speaker? 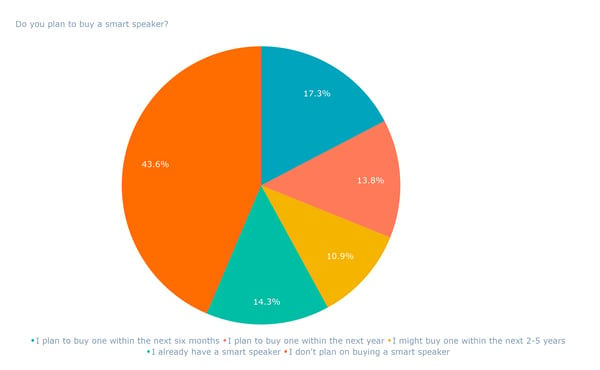 Most respondents — about 43% — indicated that they do not plan to buy a smart speaker.

It’s interesting to note, however, that while a smart percentage, the second-highest number of respondents indicated that they plan to buy one within the next six months.

That could align with more of the top contenders in the voice assistant market continuing to release newer models of their smart speakers, with improved functionalities and additional features (such as video).

The Value of Voice Assistants and Smart Speakers Remains Ambiguous

For many consumers, the purpose and tangible use cases of voice assistants (and the smart speakers they power) remain unclear. When we asked 818 users across the U.S., UK, and Canada, “If you do not own a smart speaker, why not?” we found that most people simply don’t see the benefits of having one.

These findings align with two other sets of data.

The first is data from Zazzle, where out of “thousands of social media users” in the UK, 35% said that they don’t believe they would ever actually use such voice assistant devices as smart speakers.

The second is an additional survey we ran among 481 people across the U.S. and Canada, where 21% of respondents said that they don’t completely understand what voice assistants do. 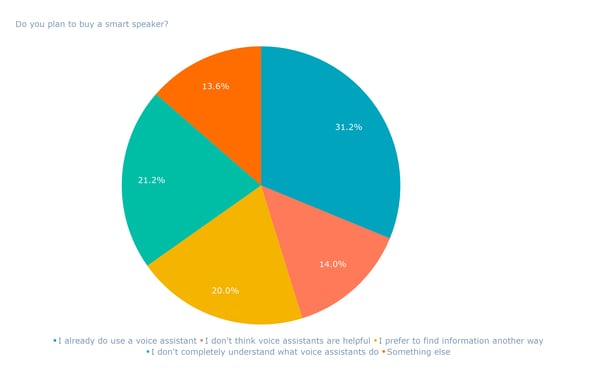 The findings above point to some possible key indications about the outlook for voice assistants and the devices they power.

First, it seems that many users are unclear about the value of voice assistants, or what they do — a finding that’s suggested by the number of survey respondents who, if they didn’t say that their understanding of voice is muddled, said that they want to learn more about the technology before investing in it.

It is possible that some users do not assign the formal terminology of “voice assistants” to the technology with which they might be on a first-name basis; for example, Siri, Alexa, or “Okay, Google.” That’s suggested by Zazzle’s finding that 68% of users acknowledged the convenience of a voice assistant, saying that they were able to find information quicker by using this technology over typing out a query.

That finding is supported by our own findings that about a quarter of users who do use voice assistants do so to answer questions.

To repeat our earlier point: More top contenders in the voice assistant market continuing to release newer models of their smart speakers, with improved functionalities and additional features. As technology improves and scales, it could become more widespread and accessible to consumers, broadening the value and use cases.

And as it does, points out HubSpot’s head of SEO Victor Pan, so do the different platforms where customers can be reached.

About the Author: Stephen Eliasson

Stephen is the senior partner and owner of Eliasson Marketing. He is a California native and has over 10 years experience in website design and online marketing.